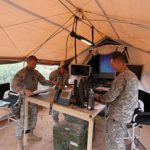 The U.S. Army has tested secure wireless equipment designed to help soldiers reduce the time it takes to setup and disassemble a tactical operations center.

Soldiers used the wireless equipment to deliver untethered network connections to the brigade main command post in an effort to support wireless voice, video and data exchange as well as wireless mission command on systems.

“When facing a near peer threat in a complex environment, it is imperative that our operations centers become more mobile with ability to move quickly, and that we have the ability to rapidly collaborate in planning to defeat a near peer adversary,” said Col. Phil Brooks, commander of the 1st Armored Brigade Combat Team, 3rd Infantry Division.

The wireless package is designed to cut command post setup and tear down times by hours as well as lessen the amount of cables and protective flooring that need to be transported from one location to another, the Army noted.

The Secure Wireless package includes advanced network operations functions and security features such as the Wireless Intrusion Detection System, which is built to help identify potential hackers trying to breach the wireless network.

The brigade will undergo another NTC training in the fall to test the full operational potential of the secure wireless technology, the Army said.

The military branch has performed risk reduction events of the wireless package with units in Hawaii, Delaware and Texas, among others.

The Army collects soldier feedback from the events to continually develop the wireless technology prior to its official fielding.