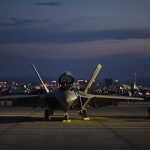 Pilots from Tyndall Air Force Base have flown F-22 Raptors to train with combat air forces from across the Defense Department as part of the Red Flag 17-3 joint, full-spectrum readiness exercise.

DoD said Thursday that 10 F-22 units from the 95th Fighter Squadron performed operations alongside F-35A and F-35B fighter aircraft from the U.S. Air Force and Marine Corps during the event.

The report noted that B-1 Lancer, B-2 Spirit, F-16 Fighting Falcon fighters and E-3 Sentry airborne warning and control aircraft will join the exercises and support operations in the exercise theater at Nellis Air Force Base.

Red Flag was designed to teach participants on how to collaborate in the field when faced with actual threats as well as maximize combat readiness and survivability of the participants.

DoD officials added that the exercise also offers a training environment for the combat air forces along with pre- and post-flight training forums wherein participants can exchange ideas.