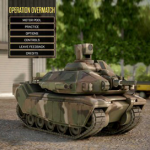 The U.S. Army has created an online gaming environment designed to collect feedback from soldiers to inform concept developers and engineers of new ideas on how to integrate new capabilities into weapons systems, vehicles and other military platforms, the Army reported Wednesday.

The Army Research and Development Command teamed up with the Training and Doctrine Command and Army Game Studio to build the Operation Overmatch gaming environment as part of the Early Synthetic Prototyping initiative.

“In a game environment, we can change the parameters or the abilities of a vehicle by keystrokes,” said Lt. Col. Brian Vogt, ESP project lead at TRADOC’s Army Capabilities Integration Center.

“Army engineers will determine if the change is plausible before we put it in the scenarios.”

The online game is scheduled to enter the beta testing phase in October.