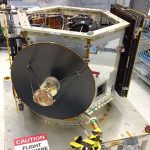 NASA will install cameras and science data processing computers for the Massachusetts Institute of Technology-built Transiting Exoplanet Survey Satellite onto an Orbital ATK spacecraft in the coming weeks following the platform’s completion of a systems integration review.

The space agency said Saturday that independent technical and scientific experts reviewed the TESS platform which will be launched aboard a SpaceX Falcon 9 rocket in March 2018 to search for exoplanets that orbit stars outside the solar system.

TESS will use four wide-field cameras to scan the sky and monitor transit events as well as survey stars approximately 100 times brighter than the ones observed during NASA’s Kepler mission.

NASA noted that TESS will also observe areas that overlap with the future James Webb Space Telescope‘s optimal viewing zone to help locate potential exoplanet candidates that will be studied for detailed characterization.