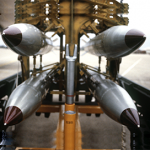 The U.S. Air Force and the National Nuclear Security Administration have completed a pair of qualification flight tests for the B61-12 gravity bombs.

The test flights were conducted as part of a three-year series meant to prepare B61-12 for service.

The first B61-12 production unit is scheduled for March 2020 completion.