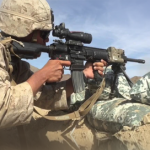 The 5.56 mm M27 Infantry Automatic Rifles, which will replace the service branch’s current M4 assault rifles, feature a 30-round magazine and can fire up to 40 rounds per minute in both semi-automatic and fully automatic firing modes.

Gen. Robert Neller, commandant of the Marine Corps, said that he plans to equip every 0311 rifleman in the service branch with the M27 IAR weapon system.

USMC began to field the 4,000 system in 2010 initially to succeed the M249 automatic rifles before the service branch decided on using both weapon systems.

Marines from the 1st Battalion, 3rd Marines first used the M27 IAR platform in combat at Garmser, Afghanistan in 2011.