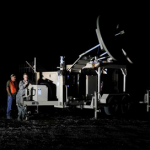 A group of Defense Department organizations and U.S. universities has tested various aircraft in an environment where global positioning system signal is degraded.

Cook added that other locations across U.S. provide GPS-denied environments, but the availability of such setup in Edwards AFB will eliminate the need to deploy aerial systems to other sites.

Wei Lee, a test safety engineer at the 412th Test Wing, said DoD needs to support academic institutions’ research and development efforts since it is “extremely difficult” for academic laboratories to work with the Federal Aviation Administration and first responders to obtain live GPS jamming data.

Universities were called to join DT NAVFEST on a trial basis and the Air Force aims to extend the opportunity to other institutions, Lee added.