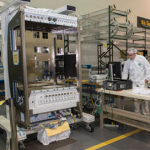 The agency projects all the EXPRESS shelves will reach their full capacity by the end of 2018.

Sean Thompson, payload facilities team lead at the Marshall Space Flight Center, said the center is building a simplified version of ISS payload racks in an effort to accommodate a demand for science payloads on the space station.

The new Basic Express Racks are designed to have common connectors such as standard ethernet cables and scheduled for deployment to ISS late next years aboard the Japanese launch vehicle HTV7.