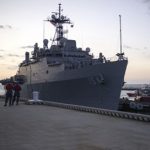 The U.S. Navy has decommissioned its afloat forward staging base USS Ponce after more than 46 years of naval service.

The military branch said Saturday it commissioned USS Ponce in 1971 as the final amphibious transport dock ship of the Austin class and refurbished the vessel into an AFSB platform in 2012 to support various missions of U.S. and allied forces.

The ship, nicknamed “Proud Lion,” was originally scheduled for decommissioning six years ago.

Ponce AFSB crew supported the U.S. 5th Fleet and Central Command’s mine countermeasures operations as well as international efforts that involved launch, recovery and sustainment of other vessels, aircraft and riverine boats.