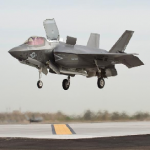 The training course will include classroom discussions, application exercises and air battle exercises.

“We are a civilian contractor which provides real life enemy threat for training purposes for the Navy and Marine Corps,” said Jeremy Gunter, ATAC detachment officer in charge.

The program will rely on actual battle replications instead of virtual simulation methods.

“Simulators can only get you so far when you are learning a new aviation platform,” said Maj. Ross Fearon, executive officer of VMFAT-501.