NASA to Conduct CubeSat Study for Water Source On Moon 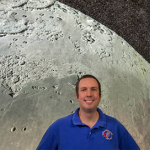 NASA has announced that scientist Noah Petro will lead a CubeSat mission to study the sources of water on the moon.

The space agency said Thursday the Mini Lunar Volatiles Mission or MiLUV aims to determine the locations of water on the moon; and study water migration to the lunar surface including permanently shadowed areas.

The researchers will use a Goddard instrument-based laser spectrometer to detect lunar surface water.

The spectrometer employs its own source of light to operate at both day and night.

“We believe that the best-suited instrument to answer where these volatiles exist and their possible movement is a laser spectrometer that measures surface reflectance at several wavelengths,” Petro said.

The effort follows previous studies on evaporating volatiles and water found on the moon such as 1994’s Clementine mission.