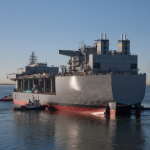 The U.S. Navy and Marine Corps are considering alternative roles for the USS Lewis B. Puller expeditionary sea base vessel, which has begun operations in the U.S. 5th Fleet as the Navy’s first ESB, USNI News reported Tuesday.

The Navy currently operates 31 amphibious ships, but the Marine Corps says it requires at least 38 ships, and up to 50 to fully address the needs of combatant commanders, the report noted.

Coffman added that the Marine Corps remains committed to L-class amphibious warships as the primary vessel for amphibious operations and for the transportation of Marine Air-Ground Task Forces to contested environments.

USS Lewis Puller could help carry the land-based Special Purpose MAGTF- Crisis Response unit in U.S. Central Command, or support the operations of an Amphibious Ready Group in the Persian Gulf, according to Coffman.

He said the Navy and Marine Corps plan to acquire additional ESBs to support mine countermeasures efforts and irregular warfare with special operations forces, Marines, coalition partners and others.

The ESB was built by General Dynamics‘ NASSCO subsidiary and was redesignated from a USNS ship to a USS warship to boost the 5th Fleet’s operational flexibility.