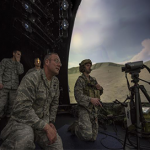 The U.S. Air Forces in Europe has started to operate a domed simulator built to support training for joint terminal attack controllers at the Warrior Preparation Center located within Einsiedlerhof Air Station in Germany.

The simulator is equipped with 4K projectors that work to offer a 270-degree field of view for trainees and can be used in conjunction with simulation-integrated binoculars, night vision and M4 carbine, the Air Force noted.

WPC plans to use the platform in future JTAC drills such as the Spartan Eagle exercise.