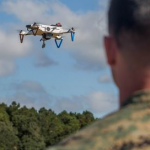 The U.S. Army and the U.S. Marine Corps have partnered to develop unmanned aircraft systems with the use of three-dimensional printing technology.

ARL researchers and Marines work to create an application suite designed to help military personnel to 3D-print UAS technology within 24 hours as needed.

The project is based on an idea that Spero and his team had several years ago during a collaboration project with Georgia Tech.

The Army then approached USMC to collaborate on the production of a software catalog meant to help Marines  select and print the type of UAS needed for a specific mission.