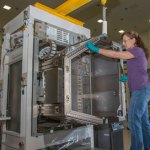 NASA has begun tests on a new space-based facility designed to help researchers study the long-term effects of microgravity on human physiology.

The Life Sciences Glovebox is being tested at the Marshall Space Flight Center in Huntsville, Alabama, and is scheduled for deployment to the International Space Station in August 2018, NASA said Thursday.

ISS researchers will use the glovebox to conduct cell biology, disease research and other scientific studies, NASA noted.

The facility is outfitted with acrylic windows and contains a pair of glove ports and a 15-cubic-foot workspace that can accommodate up to two people.

NASA noted the new facility builds on the Microgravity Science Glovebox that was installed on the orbiting laboratory in 2002.

“For 15 years, the Microgravity Glovebox has been constantly in use and constantly in demand,” said Susan Spencer, deputy project manager for the Life Sciences Glovebox.

“But it was clear we needed to relieve the payload congestion; providing a second facility to better serve the research community competing for glovebox experiment time,” Spencer added.

NASA will continue efforts to integrate and test the new glovebox at Marshall ahead of the facility’s March 2018 delivery to Japan for launch preparations.