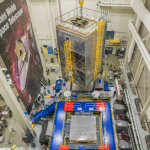 NASA will conduct an independent review on the status of the James Webb Space Telescope program ahead of a planned launch in the first half of 2019, Space News reported Thursday.

The space agency will release an updated launch date for the future space telescope following the independent review despite potential challenges that could delay the spacecraft’s lift off.

Thomas Zurbuchen, NASA associate administrator for science, said at a hearing of the House Science Committee’s space subcommittee he directed the JWST team to begin the review in January following the completion of tests involving the space telescope’s sunshade technology.

Cristina Chaplain, director of the Government Accountability Office, said the space telescope’s launch may experience future delays given its current assembly and testing phase and the risks associated with future tasks and schedules.

The House Science Committee hearing also discussed the status of other NASA projects including the Wide-Field Infrared Survey Telescope and the Transiting Exoplanet Survey Satellite.