The Defense Department has released a national defense strategy that seeks to address the “re-emergence of long-term strategic competition” the U.S. faces with countries such as Russia and China, Defense News reported Friday.

The document details the U.S. military’s three lines of effort as it works to broaden the competitive space and those include the need to increase the lethality of the Joint Force to rebuild military readiness; strengthen alliances; and the need to reform DoD’s business practices.

The report also states the Joint Force’s aim to deter aggression in the Middle East, Europe and the Indo-Pacific regions as well as the Pentagon’s plan to adopt a “rapid, iterative approach to capability development.” 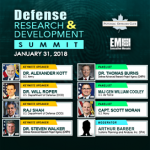 Under the strategy, DoD will work to reduce acquisition risk and address technology obsolescence through realignment of incentives and reporting structures to accelerate capability delivery; expansion of the role of intelligence analysts and warfighters in the procurement process; and use of non-traditional suppliers.

“Prototyping and experimentation should be used prior to defining requirements and commercial off-the-shelf systems,” the document states.

“Platform electronics and software must be designed for routine replacement instead of static configurations that last more than a decade.”

Gen. Joseph Dunford, chairman of the Joint Chiefs of Staff, is expected to issue the national military strategy later this year, the report added.