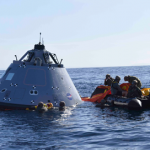 NASA and the U.S. Navy have conducted another recovery test of an Orion test vehicle aboard the USS Anchorage amphibious transport dock.

The Navy said Thursday the Underway Recovery Test-6 is meant to ensure the safe retrieval of the Orion spacecraft crew module, which is designed to transport humans to deep space.

During URT-6, NASA engineers and Navy sailors released an Orion test capsule from USS Anchorage’s well deck, then used rigid-hull inflatable boats to bring the capsule back to the ship when enough distance was established.

The latest demonstration marks the fourth URT aboard Anchorage, a San Antonio-class vessel.

URTs are intended to support the assessment of recovery processes, procedures, hardware and personnel in a real open-ocean environment ahead of the actual Orion recovery mission.

The team started conducting URTs in 2014 and will perform URT-7 on San Antonio-class ship USS Somerset in October, when NASA is also scheduled to validate recovery hardware.

Orion is slated to fly a crew for the first time in the early 2020s during a mission called Exploration Mission-2.