Study Explores Use of Virtual Reality Tech in Pilot Training 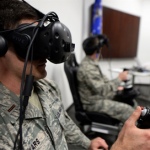 The service branch said Friday the study occurred at Columbus Air Force Base from Jan. 9 to Jan. 12 and examined the application of an VR environment to adult learning.

The study tackled the human brain’s behavior with other body parts while subjected to learning processes using VR.

Three groups composed of individuals with no previous T-6 Texan II flight experience were tasked to fly in a T-6 simulator through four simulation tests.

The first test was done as a basic sortie simulation around Columbus AFB to serve as a basis of comparison for the succeeding tests.

Afterwards, subjects participated in three virtual training sessions with corresponding environments, as optical and auditory cues decreased through the progression of tasks.

Participants then went on a conclusive flight with the T-6 simulator to identify any improvements having stemmed from the VR training.

The effort also made use of support from other parties such as bio-machine software company Senseye.

In addition to eye movement, the study also sought to collect data on heart and lung activity.

Data gathered through the study will be analyzed in association with success/failure patterns observed from the simulation tests.