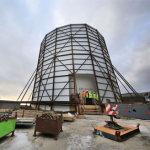 The U.K. ministry of defense has invested $14 million to build a radar facility in a northernmost island of Scotland as part of efforts to help the British air force track unidentified military or civilian aircraft.

MOD also intends for the facility’s radar system to help the country’s air force and NATO to monitor airspace as far as the Norwegian Sea.

The military service will remotely operate the platform and partner with companies to perform on-site maintenance.

Saxa Vord served as an early warning radar station for NATO’s northern flank from the 1960s through the 1970s, according to MOD.