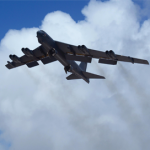 The U.S. Air Force has detailed its plans to update its existing bomber fleet and acquire new aircraft in the fiscal year 2019 budget request.

The military branch said Monday it aims to modernize the B-52 Stratofortress fleet; continue installing upgrades on the B-1 Lancer and B-2 Spirit aircraft; and acquire the future B-21 Raider planes.

“As part of our decisions presented in the FY19 President’s Budget, the Air Force will update the B-52 bomber fleet and fund development of replacement engines,” said Air Force Secretary Heather Wilson.

Wilson added that the Air Force wants B-1 and B-2 planes to stay operational until the deployment of B-21s.

Northrop Grumman secured a contract in 2015 to develop the B-21 aircraft as part of the Air Force’s Long Range Strike Bomber program.

The Air Force seeks to start fielding B-21s in the mid-2020s and eventually retire B-1s and B-2s when enough B-21 aircraft are deployed.

The service branch decided to maintain B-52s based on factors such as aircraft availability, mission capability, supply, costs and maintenance hours per flying hour.