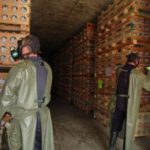 The Defense Advanced Research Projects Agency has kicked off a program to develop networks of sensors that can detect chemical, biological, radiological, nuclear and explosives threats.

SIGMA+ is an expansion of DARPA’s initiative to identify radiological and nuclear materials, the agency said Tuesday.

“The goal of SIGMA+ is to develop and demonstrate a real-time, persistent CBRNE early detection system by leveraging advances in sensing, data fusion, analytics, and social and behavioral modeling to address a spectrum of threats,” said Vincent Tang, SIGMA+ program manager in DARPA’s Defense Sciences Office.

Tang added that SIGMA+ researchers will work to show that distributed sensor networks combined with automated intelligence analytics and social science insights can be deployed and scaled to boost the probability of mitigating CBRNE weapons of mass destruction.

The program aims to build a long-range detection system that can help identify improvised chemical and explosive threats ahead of attacks.

Researchers will also create sensors designed to detect traces of pathogens in real time to alert officials of potential biological terror attacks, such as the release of anthrax or viruses.

DARPA plans to release a Broad Agency Announcement next month and a second BAA later this year.

Phase 1 of the program will focus on the development of novel sensors for chemicals, explosives and biological agents, while the second phase will cover network development, analytics and integration efforts.

The agency is scheduled to host an event on March 7 in Arlington, Virginia to discuss SIGMA+ with potential industry proposers.