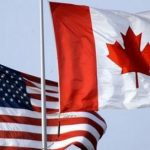 Nielsen and Goodale also discussed other topics such as cybersecurity, migration, cannabis and opioid, preclearance and irregular migration during their meeting, the Canadian government said Monday.

Both officials talked about their respective governments’ obligation to manage transition and trade activities along the U.S.-Canada border.

They have committed to continue to identify trade and travel management approaches that will support employment and economy in both countries.

The U.S. and Canada have jointly concurred to enact the Agreement on Land, Rail, Marine and Air Transport Pre-clearance and the Entry/Exit initiative that seeks to expedite confirmation of a traveler’s departure at the border.