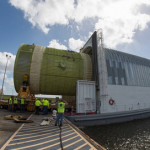 NASA loaded a test model of heavy-lift rocket intertank onto a barge Thursday at Michoud Assembly Facility in New Orleans for shipment to the Marshall Space Flight Center in Alabama.

The intertank is designed to link the two fuel tanks of the SLS core stage and serve as the upper-connection point of two solid rocket boosters.

A flight version of the intertank will contain avionics and electronics built to function as the “brains” of the SLS rocket, NASA noted.

The agency redesigned and extended its barge Pegasus to accommodate the rocket’s core stage.

NASA will use the 310-foot-long boat to transport the flight core stage from Michoud to other agency facilities for testing and launch.