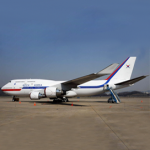 “The 10-year contract for the leased VIP jet is to be terminated two years from now, so the government should make a decision if it would renew the lease or buy a new one,” said an official with the Asian country’s presidential office Cheong Wa Dae.

“Given the schedule of a public tender, security of budget and plane manufacturing, the decision needs to be made in the first half of the year,” the official added.

South Korea’s defense acquisition program administration has begun to prepare the new tender for the country’s own Air Force One.

“The Air Force will review the requirements for the VIP aircraft in accordance with the budget,” said Kang Hwan-seok, a spokesman for DAPA.

“Once the requirements are set, we’re going to progress the bid, inviting foreign contenders.”

An official with Boeing’s Korean arm said the company may potentially offer a modified 777 aircraft for the country’s VC-X presidential aircraft program due to its economic feasibility.

The official noted the company will fully assess the request for proposals once the Korean government issues the tender.