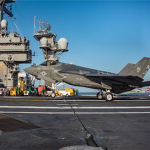 Pilots within strike fighter squadrons 125 and 101 flew the F-35C through 140 obstacles to qualify the aircraft for day and night use, in preparation for operational testing anticipated later in 2018, the U.S. Navy said Friday.

The aircraft also exhibited its foldable-wing feature, a component needed for operating alongside other platforms such as F/A-18C Hornets, F/A-18E/F Super Hornets and EA-18G Growlers as part of a carrier-based full air wing.

As part of the aircraft’s underway period, the USS Abraham Lincoln was equipped with the F-35’s Autonomic Logistic Information System, a platform that integrates and manages mission planning, maintenance, supply chain and sustainment data associated with the aircraft.

Previously, the carrier’s pilots pioneered the operational use of the Joint Precision Approach and Landing System through a carrier qualification effort that was held in late 2017.

The JPALS makes use of global positioning system technology to guide F-35Cs in landing through all types of weather.