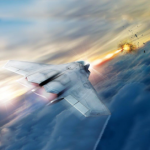 The U.S. Air Force will perform tests in the summer of a laser weapon that will be installed on fighter jets to counter drones and missiles, Newsweek reported Tuesday.

Jeff Stanley, deputy assistant secretary of the Air Force for science, technology and engineering, told reporters that the laser weapon will undergo ground tests this summer and flight tests next year.

The test is part of the Air Force’s Self-protect High Energy Laser Demonstrator program and will involve a weapon that will work to provide 50 kilowatts of power.

Lockheed Martin secured a $26.3 million contract from the Air Force Research Laboratory in November 2017 to design, develop and manufacture a laser weapon system under the SHiELD program.

The Air Force aims to mount the laser weapon on the F-15, F-22 Raptor and F-35 Lightning II fighter planes as well as future bomber aircraft.

The weapon is intended to disrupt unmanned aircraft systems and ground-to-air, air-to-air and cruise missiles.