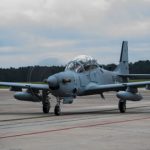 Senior officials at the U.S. Air Force have stated various plans on how to speed up the procurement of light attack aircraft as the service prepares to host the next phase of the OA-X experiment from May to July at Holloman Air Force Base in New Mexico, The Drive reported Thursday.

Wilson, a 2018 Wash100 recipient, announced in February that the service plans to allocate $2.4 billion in funds to procure such planes over the next five years.

Lt. Gen. Arnold Bunch, military deputy to Air Force assistant secretary for acquisition, told Aviation Week in an interview that the service has begun to look for ways to transition the OA-X light-attack aircraft demonstration into a procurement initiative as soon as 2019.

Gen. Ellen Pawlikowski, head of Air Force Materiel Command, said Wednesday at a Mitchell Institute-hosted event that the service may have to adopt a “throw-away culture” in which the Air Force will purchase and operate a small number of light-attack planes for a short-term period and then procure a new fleet of aircraft.

Sierra Nevada and Embraer will demonstrate their A-29 Super Tucano aircraft at the OA-X experiment, while Textron will fly its AT-6 Wolverine at the event.