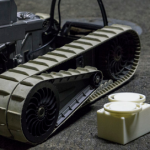 The U.S. Marine Corps has used an additive manufacturing process to produce replacement parts for a small unmanned ground vehicle and fighter aircraft.

USMC said Thursday that Combat Logistic Battalion 31 uses a three-dimensional printer technology as an alternative source for components when immediate action is required, such as an impending failure of a mechanical part, USMC said Thursday.

Additive manufacturing approach replicates software-generated 3D models by breaking them down into layers to be reproduced with a printer.