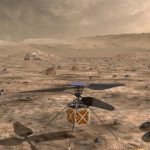 A small unmanned rotorcraft is set to take off with NASA’s Mars 2020 rover aboard United Launch Alliance’s Atlas V rocket in July 2020 from Cape Canaveral Air Force Station in Florida.

The agency’s Mars Helicopter is an autonomous aircraft that aims to demonstrate controlled flight on the red planet’s thin atmosphere in support of future Mars exploration missions, NASA said Saturday.

NASA’s Jet Propulsion Laboratory initiated the aircraft in August 2013 as a technology demonstration project. The rotorcraft has solar cells and a heating platform and will take a 30-day flight test.

“We don’t have a pilot and Earth will be several light minutes away, so there is no way to joystick this mission in real time,” said Mimi Aung, Mars Helicopter project manager at JPL.

“Instead, we have an autonomous capability that will be able to receive and interpret commands from the ground, and then fly the mission on its own,” Aung added.

The Mars 202 rover and the aircraft are expected to arrive at the red planet by February 2021 in order to carry out geological assessments and evaluate natural hazards and resources as well as collect rock and soil samples.