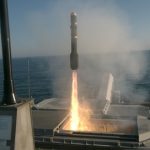 The Freedom variant LCS launched four longbow Hellfire missiles to inshore craft targets in a simulated complex warfighting scenario, during the test that took place Friday off the coast of Virginia, the Navy said Wednesday.

The ship’s crew made use of radars and various systems to detect the missiles’ targets.

The exercise also marks the first LCS-based integrated firing of an SSMM. The Navy expects to field and achieve initial operational capability of the SSMM in 2019.

Shawn Johnston, captain of LCS Squadron Two, stated that the SSMM testing’s next phase will be performed with the USS Detroit LCS.