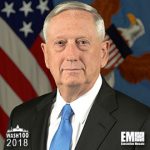 “The U.S. government enjoys the largest and richest repository of talent and ability in the world. To be recognized as a leader among your peers is a rare honor, but to be recognized among your peers as the best of the best in this hyper-competitive arena is rarer still. We at Executive Mosaic couldn’t be more honored to present Secretary Mattis with this prestigious award,” said Jim Garrettson, Executive Mosaic’s CEO and founder.

The total top 10 featured a split between GovCon Executives and Government Executives. In addition to Secretary Mattis, we would like to congratulate our leaders in the polls: