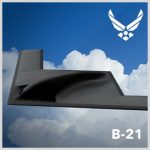 B-21 Raider bombers under development by Northrop Grumman will replace current B-1 Lancer and B-2 Spirit units stationed at Dyess AFB in Texas, Ellsworth AFB in South Dakota and Whiteman AFB in Missouri, the military branch said Wednesday.

Northrop won the contract in 2015 to produce the new planes.

Air Force Secretary Heather Wilson, a 2018 Wash100 recipient, said the service branch expects to receive the first B-21 aircraft in the mid-2020s.

Gen. David Goldfein, Air Force chief of staff, said that Raider is designed to carry a conventional and nuclear weapon payloads that work to strike targets.

The Air Force aims to hand down a Raider basing decision after it addresses regulatory and planning compliance requirements mandated by the National Environmental Policy Act.

The branch added it will not retire current bombers until there is an adequate number of B-21s.