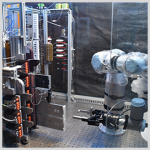 The Defense Advanced Research Projects Agency has supported the development of software tools and other devices designed to accelerate the design and synthesis of new molecules for defense and military applications through a four-year program.

The Make-It program works to facilitate the creation of synthetic routes used to develop new molecules through software platforms that are based on machine learning, DARPA said Tuesday.

“Make-It is not only freeing chemists to expend brain power in other areas such as molecular discovery and innovation, it is opening chemical synthesis and discovery to a much broader community of scientific researchers who will benefit from faster development of new molecules,” said Anne Fischer, program manager in DARPA’s defense sciences office.

“We’re essentially coding the chemical synthesis process. … Because the routes are implemented with software-based instructions, any Make-It synthesis device should produce chemicals with precisely the same make-up every time,” Fischer added.

The Make-It program is now in its third year and focuses on rapid reaction screening; automated synthesis or production; and automated molecule design areas.

Some of the organizations involved in the research initiative include SRI International, Grzybowski Scientific Inventions, Massachusetts Institute of Technology, Purdue University, Boston University and the University of Glasgow.