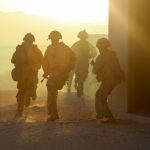 The U.S. Army has provided an electronic warfare system prototype to the 1st Brigade Combat Team’s 1st Infantry Division as part of efforts to equip and train brigades to counter near-peer adversaries.

The team became the first military unit within continental U.S. to receive the technology after the service branch completed a fielding effort in February to select Europe-based units, the Army said June 28.

The brigade’s EW officers were trained to use the platform as an opposing force at the National Training Center in Fort Irwin in California.

The Army’s Rapid Capabilities Office and Project Manager for EW and Cyber constructed and delivered the EW equipment in a move to address operational needs of U.S. Army Europe.