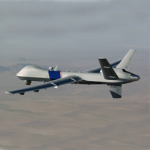 The Federal Aviation Administration has announced that the Northern Plains Unmanned Aircraft Systems Test Site is now allowed to fly large drones beyond visual line of sight without a chase plane.

The North Dakota State Government said Tuesday that the authorization enables the GA-ASI Predator A and B unmanned aircraft to fly within 30 miles of the Grand Sky aviation park at the state’s Grand Forks Air Base and use a ground-based radar system instead of chase aircraft.

Chase planes are used for test flights to monitor and ensure the safety of experimental aircraft.

“This milestone is not only beneficial to North Dakota but to the whole UAS community. We look forward to expanding our capabilities and partners who will leverage this approval,” said Nicholas Flom, executive director of the NP UAS TS.