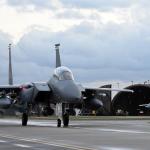 Gen. Joseph Dunford, chairman of the Joint Chiefs of Staff, has said he intends to arrange tabletop exercises in the fall of this year to help the Defense Department establish and explore the “war fighting attributes” of a new combatant command for space, SpaceNews reported Wednesday.

“I agree that the U.S. Space Command design should not assume all aspects of the U.S. Special Operations Command model, especially in terms of acquisition authorities which may require legislative action,” Dunford said in the Sept. 24 memo obtained by the publication.

“However, the U.S. SOCOM model is particularly informative on the development and shaping of U.S. Space Command’s war fighting functions, authorities, structure and command relationships,” he added.

Dunford also responded to Wilson’s concerns about the appointment of an assistant defense secretary for space and potential overlaps between the proposed space force and Space Command.