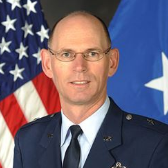 President Trump nominated U.S. Air Force Maj. Gen. Duke Richardson as military deputy at the Office of the Assistant Secretary of the Air Force for Acquisition, Technology and Logistics, the Department of Defense said Friday. He was also nominated to the rank of lieutenant general and will be based at the Pentagon in Washington, D.C.

Richardson is the program executive officer for presidential airlift recapitalization at the Air Force Life Cycle Management Center under the Air Force Materiel Command. In his current role, Richardson manages all life-cycle activities to support recapitalization efforts for Air Force One aircraft. He previously served as the Air Force's program executive officer for tankers where he led life-cycle operations for KC-46, KC-135 and KC-10 weapon systems supporting the U.S. military and its partners.

He joined the Air Force in 1983 as an avionics technician and has held materiel-related duties at the Air Force Research Laboratory.