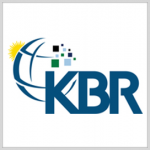 AFSCN is a global system that provides command, control, and communications for space vehicles and satellites. It supports telemetry, tracking, and command for U.S. defense space vehicles as well as selected space programs run by NASA and foreign allies.

KBR is a global provider of differentiated professional services and technologies across the asset and program life cycle within the Government Services and Hydrocarbons sectors.

The company employs over 37,500 people worldwide (including our joint ventures), with customers in more than 80 countries, and operations in 40 countries, across three synergistic global businesses: Government Solutions, Technology Solutions and Energy Solutions.