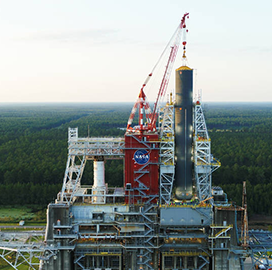 NASA's Kennedy Space Center has accepted delivery of hardware that would help personnel prepare for the Space Launch System's first Moon mission with the Orion spacecraft.

The space agency said Saturday it will use the core stage pathfinder to train lift crews in handling hardware of the SLS rocket. Pathfinders are full-scale mock-up models that have the shape and size of their corresponding SLS components.

The core stage pathfinder arrived in a package from NASA's Pegasus barge, a vessel tasked to ship components and test articles of the SLS rocket. NASA will employ a total of three SLS pathfinders, including those for the launch vehicle's solid rocket booster and RS-25 engine.

Personnel at NASA’s Stennis Space Center completed lift and handling exercises with the core stage pathfinder in August in preparation for green run tests with the actual core stage.

“Among other things, the exercise helped us identify minor facility modifications early enough to provide the time needed to make the corrections prior to the arrival of the core stage flight hardware," said Barry Robinson, B-2 Test Stand core stage test project manager at Stennis.

The pathfinders will help NASA prepare SLS for Artemis I, a mission that aims to send astronauts to the moon and revive manned lunar exploration.