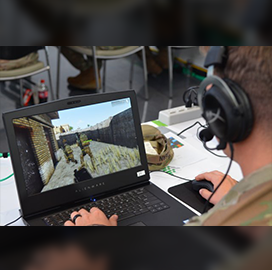 The U.S. Army's 4th Infantry Division has tested combat vehicle technologies in a virtual, simulated environment to help a cross-functional team further understand requirements. The service branch said Monday that its Ground Vehicle Systems Center is virtually prototyping technologies to reduce the need for in-field tests and save resources.

The five-day series of virtual trials would generate input for the Next Generation Combat Vehicle CFT's effort to learn more about manned-unmanned teaming.

"This latest experiment will provide us with an understanding of which technologies are most critical for the robotic combat vehicle to be successful in an operational environment," said Brig. Gen. Ross Coffman, the CFT's director.

"RCVs were able to effectively designate targets and conduct target handoff with other RCVs which executed the target using Hellfire missiles," said a soldier who took took part in the virtual exercise.