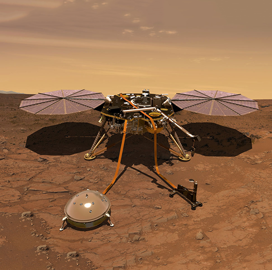 NASA is continuing efforts to recover the InSight lander’s heat probe that stopped operating since it began digging the Martian surface in February. The agency said Thursday it is analyzing various ways of maneuvering InSight’s robotic arm to assist the heat probe, which is known as “the mole” and is intended to dig up to 16 feet below Mars' surface to measure the amount of heat it emanates.

During the operation, the team discovered up to 4 inches of duricrust or thick cemented soil beneath the planet's surface. The team is working on soil-scraping techniques as part of the probe and plans to make the images captured by the lander available to the public.

JPL manages the InSight program, while the German Aerospace Center built the heat probe as part of the Heat Flow and Physical Properties Package instrumentation package.