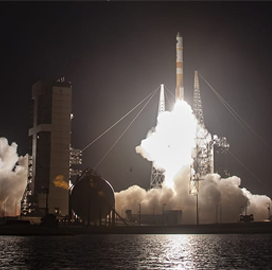 U.S. Space Command has accepted the 10th satellite of the Wideband Global Satellite Communication constellation following the completion of on-orbit testing performed by a team of engineers and operators from the U.S. Air Force, Army and Navy.

The team validated the Boeing-manufactured satellite's anti-jam capabilities and cybersecurity techniques and procedures that will be integrated into the entire constellation and then recommended it for acceptance into the WGS system, the Los Angeles Air Force Base said Tuesday.

Boeing verified the performance of WGS-10's and handed control authority of the satellite to the Air Force on July 10.

The command will begin to transition users to the new satellite, which was launched into orbit in March aboard United Launch Alliance's Delta IV medium rocket.

With WGS-10's transition, the Air Force will focus on the production and launch of the 11th WGS spacecraft that would be developed under a potential $605M contract with Boeing.