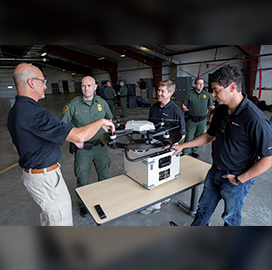 Two agencies within the Department of Homeland Security tested new surveillance technologies in an effort to address vulnerabilities concerning the U.S.-Canada border.

DHS' Science and Technology Directorate and U.S. Border Patrol tested these technologies at Havre Sector in Sweetgrass, Mont., from Aug. 12 to 23 in support of the Homeland Security Enterprise, DHS said Tuesday.

The tests demonstrated the use of these surveillance technologies to detect airborne and land objects while connected to a communications network.

The hybrid network provides situational awareness to portable communications devices of agents operating along the border.

"Once these tools are deployed on a wider scale, our agents will be able to expand all their communications networks, simultaneously monitor remote lower-priority areas of the border while physically monitoring high-priority areas and immediately and effectively deploy resources to areas that need them most," said Shawn McDonald, DHS S&T program manager.