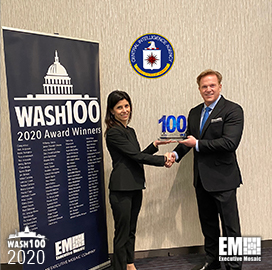 Executive Mosaic recognizes Gallina for her efforts in driving the CIA’s information technology and cloud adoption as well as reaching out across the industry to improve the agency’s success. We are thrilled to present the most coveted and prestigious award in government contracting to Gallina.

She succeeded John Edwards as the CIO of the CIA in April 2019. Within a few months, she had begun advocating for the agency to reach out to industry partners to drive innovation and improve communication between industry and government. She also recognized that the CIA needs to accelerate its cloud adoption process as well as push to advance mobility in the agency.

“Welcoming Juliane back to the agency to lead our global IT efforts will ensure CIA continues to outpace our adversaries in IT innovation,” said Andy Makridis, chief operating officer at the CIA.

In addition, Gallina serves as the director of the Information Technology Enterprise. She is responsible for all IT systems and personnel for U.S. federal agencies, as well as its global communications network.

Gallina has worked for IBM as vice president of U.S. federal key accounts since Jan. 2018. She has also held other positions with the company since 2010, including the director of U.S. federal solutions. Gallina also served as a commander in the U.S. Navy between 1992 and 2013 and worked in the National Reconnaissance Office for a decade.

Executive Mosaic congratulates Juliane Gallina for being a recipient of the 2020 Wash100 Award. Her commitment to the CIA’s advancement in IT, cloud and communication between the agency and industry will prove to be influential to the GovCon sector over the course of 2020.

Visit the Wash100 site to learn about the rest of the 2020 Wash100 Award winners. You can also vote for the top ten executives that you believe will have the most significant impact on the GovCon market in 2020. Vote here and don’t forget to read a new Wash100 profile on GovConWire and ExecutiveBiz every day.