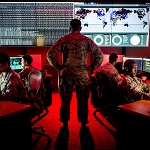 The soldiers will serve as part of Task Force Echo, which the Army established over the past three years. Currently, the task force is comprised of over 450 personnel from the Army National Guard.

"The soldiers before you are the warriors of the 21st century, and they bring skills and expertise that are changing the face of modern warfare,” Col. Brian Vile, commander of the 780th Military Intelligence Brigade, during the formal induction ceremony.

“The decision to utilize the dedicated, experienced, and technically skilled members of the Guard in this capacity clearly demonstrates the integral role the National Guard plays in the defense of our nation,” he added.