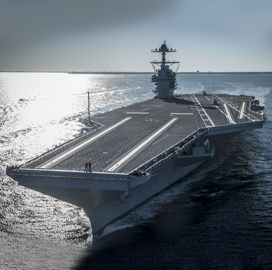 Engineers will inspect software of the elevator's electrical and mechanical systems for operability testing. The new phase follows recently concluded phase one testing that tackled the elevator's actuators.

“These lower stage elevators are critical to our lethality in that they will allow our crew to move ordnance between the lower levels and the main deck," said Capt. John Cummings, the ship's commanding officer.