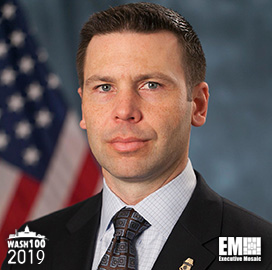 "Kevin is regarded as one of the country's leading experts on anti-terrorism and border security, and we are proud to welcome him to AE Industrial Partners," said David Rowe managing partner of AEI. "Our portfolio companies will benefit from his deep knowledge of the goals and priorities of the U.S. government and national security, and we are confident that he will bring his expertise to bear across our growing portfolio."

As secretary of DHS from April 2019 to Nov. 2019, McAleenan managed 240,000 employees in eight operational agencies and multiple headquarters components, including U.S. Customs and Border Protection, the U.S. Coast Guard, the Transportation Security Administration and the U.S. Secret Service.

Prior to his appointment, McAleenan served as commissioner of the U.S. Customs and Border Protection (CBP), where he supervised 60,000 employees, an annual budget of over $13 billion and ensured the effective operations to protect national security while promoting economic prosperity.

He also directed CBP's three core missions, including counterterrorism, border security and trade enforcement. With CBP he financed $4 trillion in trade and facilitated travel of over 365 million people through ports of entry.

Previously, McAleenan served as deputy commissioner from Nov. 2014 to April 2019. In the role, he served as the agency’s chief operating officer and senior career official. As deputy commissioner, CBP developed strategies that protect the nation’s borders from terrorism and transnational criminal networks.

Additionally, he helped CBP implement innovations that have facilitated the U.S. international arrival and departure process, saving the government and travel industry millions of dollars. He also developed a trade transformation agenda, designed to help America compete in the global economy.

“I am pleased to join the AEI team and look forward to helping guide the firm and its portfolio companies as they look to support the U.S. government's critical homeland and national security missions," said Mr. McAleenan. "I have been impressed with AEI's deep sector experience and am excited to join the team."