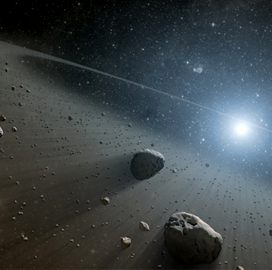 The agency said Tuesday it selected two studies on ultraviolet flare analysis and spectrometer-based imaging of the Milky Way for the “Small Explorer” increment of the program. Each proposal will receive $2 million to conduct research for nine months.

The second program increment, Missions of Opportunity, will allocate $500,000 to two teams that will work on a nine-month conceptual study.

The first proposal involves UV capabilities and small satellites that visualize gravitational waves from stars, while the second would be sent to the International Space Station to assess gamma-ray phenomena resulting from the death of stars.

"From studying stars and planets outside our solar system to seeking answers to the largest cosmic mysteries, I look forward to the breakthrough science from these modest size missions,” said  Thomas Zurbuchen, associate administrator of NASA's Science Mission Directorate.

NASA plans to select two among the four proposals that will become official missions slated for 2025. SMEX costs may reach up to $145 million each, while MO missions may each incur a maximum of $75 million.