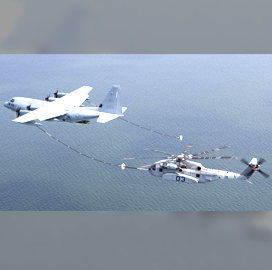 The King Stallion helicopter was able to plug into a drogue situated behind the KC-130J plane and operate amid atmospheric turbulence during the four-and-a-half-hour test flight over Chesapeake Bay, the Naval Air Systems Command said Thursday.

The air-to-air refueling event sought to demonstrate the CH-53K’s ability to manage forces on the probe when reaching the funnel shaped device at the end of the tanker hose.

Col. Jack Perrin, program manager for H-53 helicopters at NAVAIR, said the new aircraft met performance targets for all engagements and showed its potential as a long-range vertical logistic platform.

King Stallion is scheduled to undergo an operational test and assessment next year. The Marines aim to deploy the initial batch of helicopters in the 2023-2024 timeframe.